Surrounded by the green of three beautiful pine forests, Castelnovo ne’ Monti lies at the foot of the Pietra di Bismantova in the heart of the Parco Nazionale dell’Appennino Tosco-Emiliano. At an altitude of 700 metres, Castelnovo ne’ Monti is a town dedicated to outdoor physical activity, with natural gyms and many sports facilities, an ideal destination for sports and environmental tourism.

The symbol of the town of Reggio Emilia, an enchanted and iconic place, is the Pietra di Bismantova. A magical, almost sacred mountain, it is an enormous rocky mass, visible even from long distances, with the shape of an isolated massif on top of which is a vast grassy plateau of 12 hectares.

At the foot of the Pietra is a Benedictine hermitage set in the rock and a place of pilgrimage since 1617. Immersed in the green gardens of Bagnolo is the Palazzo Ducale, built by the Este family as a symbol of their dominion over these territories. Today the Ducal Palace houses a branch of the Municipality, but the gardens are a popular destination for families and children.

Recently renovated and of medieval origin is instead the historic centre of Castelnovo ne’ Monti, where you can admire splendid views.

If you visit Castelnovo ne’ Monti, you must try the gnocco fritto with salami. It is a dough very similar to bread which is fried, swelling but remaining soft inside. It is served with local cheeses and cured meats.

Obviously, as is the case throughout Emilia-Romagna, fresh egg pasta is also traditional: try tortelli filled with potatoes and mixed garden herbs, served with butter and Parmesan cheese or with a sauce made from local porcini mushrooms.

Today considered the capital of the Reggio Emilia’s Apennines, Castelnovo ne’ Monti has medieval origins. The name originates from the castle built on the network of three hills that enclose the town, now an archaeological site that can be visited inside a pine forest.

At the foot of the castle rose the first inhabited nucleus of the town, while about one kilometre from the historic centre rose the Pieve, of medieval origin, which has been restored several times over the centuries. Near the Pietra di Bismantova in ancient times there was a castle, which unfortunately later collapsed together with the rocky ridge on which it was built.

The presence of human settlements dates back to the Bronze Age, as evidenced by the remains found in Campo Pianelli. However, it is not until the 11th century that written documents begin to appear with any continuity.

The hamlet of Felina, aggregated to the municipality in 1859, is instead attested for the first time in 870 when it became the private property of a close relative of Emperor Ludovico II. Following the vicissitudes of the Matildic family, Felina maintained an important role for centuries and in its territories stood a castle of which today only a tower called “Il salame” remains. Here, in 1409, Michele Attendolo Sforza put the head of the Parma enemy Ottobono Terzi on a pike.

According to tradition, the Pietra di Bismantova inspired Dante’s Purgatory, so much so that the Supreme Poet cited it in the fourth canto of his Purgatory. In all probability Dante, whose 700th death anniversary falls this year, visited these places personally in 1306, on his way to Padua from Lunigiana. 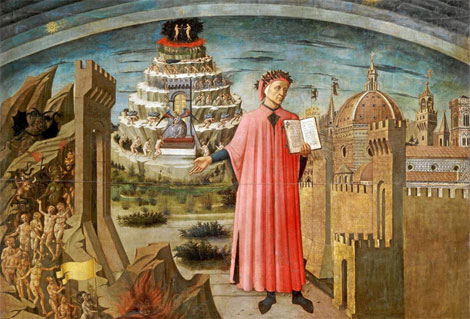 Around Castelnovo ne’ Monti, starting directly from the town centre, there is a dense network of paths that can also be followed by mountain bike. Among these, not to be missed is the ring that goes around the Pietra di Bismantova: a very suggestive route, especially from a landscape point of view, and easily expandable.

Starting from this ring, in fact, it is possible to reach other routes within the Triassic Chalk Valley along the Secchia River, reaching the Poiano springs, where thermal water flows under the open sky.

For over 500 years, the last weekend in September has been dedicated to the traditional St Michael’s Fair. The event fills the streets of the town centre with hundreds of artisan exhibitors, food producers from the local gastronomic tradition and others. In addition, you can find exhibitors related to the world of clothing as well as a section entirely dedicated to agricultural equipment and livestock.

HOW TO GET THERE

Castelnovo ne’ Monti can be easily reached from Reggio Emilia. After exiting the motorway, follow the signs for Passo del Cerreto and take the SS63. Continuing along this road for about 50 kilometres, after 1 hour and 10 minutes you will reach your destination. From Parma, Castelnovo can be reached by taking the SS53 for 59 km.

Castelnovo ne’ Monti can also be reached by train, getting off at Reggio Emilia station and taking the bus from Piazzale Europa in front of the station.

Castelnovo ne’ Monti has participated in all three editions of the Appenninica MTB Stage Race held so far.